It’s halfway through the year, and while this year hasn’t gone according to plan for anyone, I am making good progress on my goal to read 100 books and to keep my reading around 85% historical fiction and nonfiction.  So far, I have read 54 books this year – over halfway to my goal!

The main purpose for my Year of Historical Reading was to get through the backlog of historical fiction and nonfiction that I had on my unread shelves.  At the beginning of the year, that number totaled 133!  While I have made a big dent in my unread historical fiction shelf, I have been slower to read more of my historical nonfiction, which is my biggest shelf!  When I visit historical sites, I tend to pick up at least one historical nonfiction book so that category of unread books grows and grows!  For the remaining half of the year, I am going to try to make a bigger effort to read from my nonfiction shelves.

June was a good reading month for me with 11 books finished.  I flew through a whole set of books from the same author and got back to reading some of the library books that I had checked out during the quarantine.  Thankfully our libraries reopened for curbside pickups in April so I have been able to add to my stacks.  I read books from very diverse time periods in history, from Jamestown to the Civil War to revolutionary-era Cuba.  I wasn’t very familiar with the details about the Cuban revolution before these books, and I am glad to have gained that knowledge!

Here are my books for June, and I have indicated if they were pulled from my unread shelves, purchased, or borrowed from the library.

The Water Dancer by Ta-Nehisi Coates (own)

I was a bit reticent to read this book since I had heard mixed reviews about its writing style.  I can see why some readers didn’t enjoy the mystical parts of the storyline, and I think most of those who have already read the author’s well-regarded nonfiction may have a hard time with this book at first since it is so different.  I don’t like pure fantasy or magical realism books but as we have seen in my reading this year, I am willing to suspend disbelief in historical fiction.  I thought the author did a wonderful job blending the horrific realities of slavery and the wrenching apart of families with the other-worldly elements.  I kept picturing Monticello in his descriptions of the house since the author had visited it for background research.  This is a very thought-provoking book, with insight into both the enslaved population and an abolitionist network trying to free them.  The way families, couples, and children are torn from the people they loved is hard but important to read.  The lyrical way that Coates tells the story breaks your heart but gives you hope at the same time.

The Plot Against America by Philip Roth (library)

I enjoy reading alternate histories and wondering “what if” about the big turning points in history.  It always amazes me that the lives of millions of people can hinge on one decision.  This book takes place during the election of the US President in 1940 when FDR was running for an unprecedented 3rd term as the Nazis were blazing across Europe.  What if the Nazi sympathizer Charles Lindbergh, the American hero of the air, had run against FDR and won?  Told through the eyes of a 9 year old Jewish boy, the slow erosion of rights and the extreme violence against the Jewish population is frightening and sudden.  How can people hate their neighbors, seemingly overnight, and turn against each other so quickly?  With so much unrest and hardship featured on the news nightly, this seemed like a very timely read.  The writing is a little stilted at times but the last 50 pages will have you staying up late to find out what happens.  I am now watching the HBO miniseries based on the book and enjoying it as well. 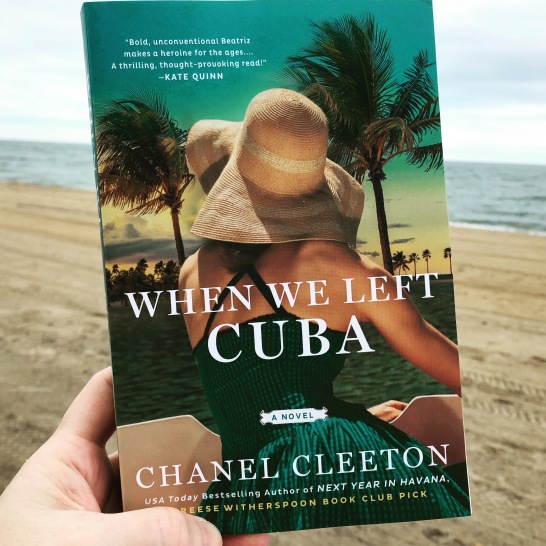 Next Year in Havana, When We Left Cuba, and The Last Train to Key West (own)

I fell in love with Chanel Cleeton’s writing this month.  I read When We Left Cuba first and tore through the story of a beautiful Cuban exile living in Florida who wants to do anything to get her country back.  The same family is featured in Next Year in Havana (which technically should be read first), and I loved learning more about the Cuban revolution and how it affects the Cuban exiles to this day.  I now want to read more books about Cuba’s rich and tragic history.  Cleeton makes a departure from Cuba in The Last Train to Key West, which was just released this June.  This fast-moving story is set during the horrific Key West hurricane in 1935.  Taking place during the Great Depression and after World War I, you can feel the desperation and the hunger of the downtrodden men and women, scrounging for survival among the sand and surf.  Cleeton has a fantastic way of drawing you into her books by making you care for the characters and their lives.  Every minute of this book was heart-pounding!

This new book has an interesting premise – what if the King and Queen of England had sent Princesses Elizabeth and Margaret to Ireland to keep them safe from the Blitz?  Two girls, one of whom is a future Queen, arriving in a recently war-torn country with still-simmering resentment of the monarchy does not sound exactly like a safe refuge.  The author claims to have some proof that this actually did happen during World War II but no official record exists.  The innocent and precocious children juxtaposed with the harried minders, reluctant estate owner, and suspicious servants makes for a powder keg of a plot.  Fans of The Crown TV series will really like this book!

A Long Petal of the Sea by Isabel Allende (library)

I had put this on my TBR because of its focus on the Spanish Civil War.  We were supposed to visit Spain over spring break but thanks to COVID-19, we weren’t able to go.  I almost didn’t read this from my library stack since we weren’t going on the trip anymore but decided to go ahead and pick it up.  I am so glad that I did!  This is only my second Isabel Allende book (I read Daughter of Fortune 20 years ago!) but I love her sweeping, epic stories that span continents and generations.  This book takes you from war-torn Spain to a refugee camp in France to the political upheaval in Chile, focusing on a man and woman forced into marriage to survive.  The changes that they undergo over the decades, both individually and as a couple, mirror the uncertainties and questions that their adopted country grapples with as well.  I always enjoy learning more about a time period in history that I haven’t studied, and I look forward to reading more books set in mid-20th century Chile.

Balm by Dolen Perkins-Valdez (own)

I met the author, Dolen Perkins-Valdez, last year at the Historical Novel Society conference, and she was thoughtful and insightful.  Balm is her hauntingly beautiful second novel about the interwoven struggles of a former enslaved man, a free woman, and a Union widow immediately after the Civil War.  The mystical story and lyrical prose make you feel as if you were walking on the grimy, gritty post-war Chicago streets or sitting in the draped, suffocating parlor in the widow’s mansion.  I kept waiting for the plot to take a sinister turn as it has elements of horror lurking in one part of the plot, but thankfully, it doesn’t make that descent.  I have not read many books that delve into the post-war time period, especially in a midwestern city like Chicago, so I enjoyed reading about a new-to-me setting. 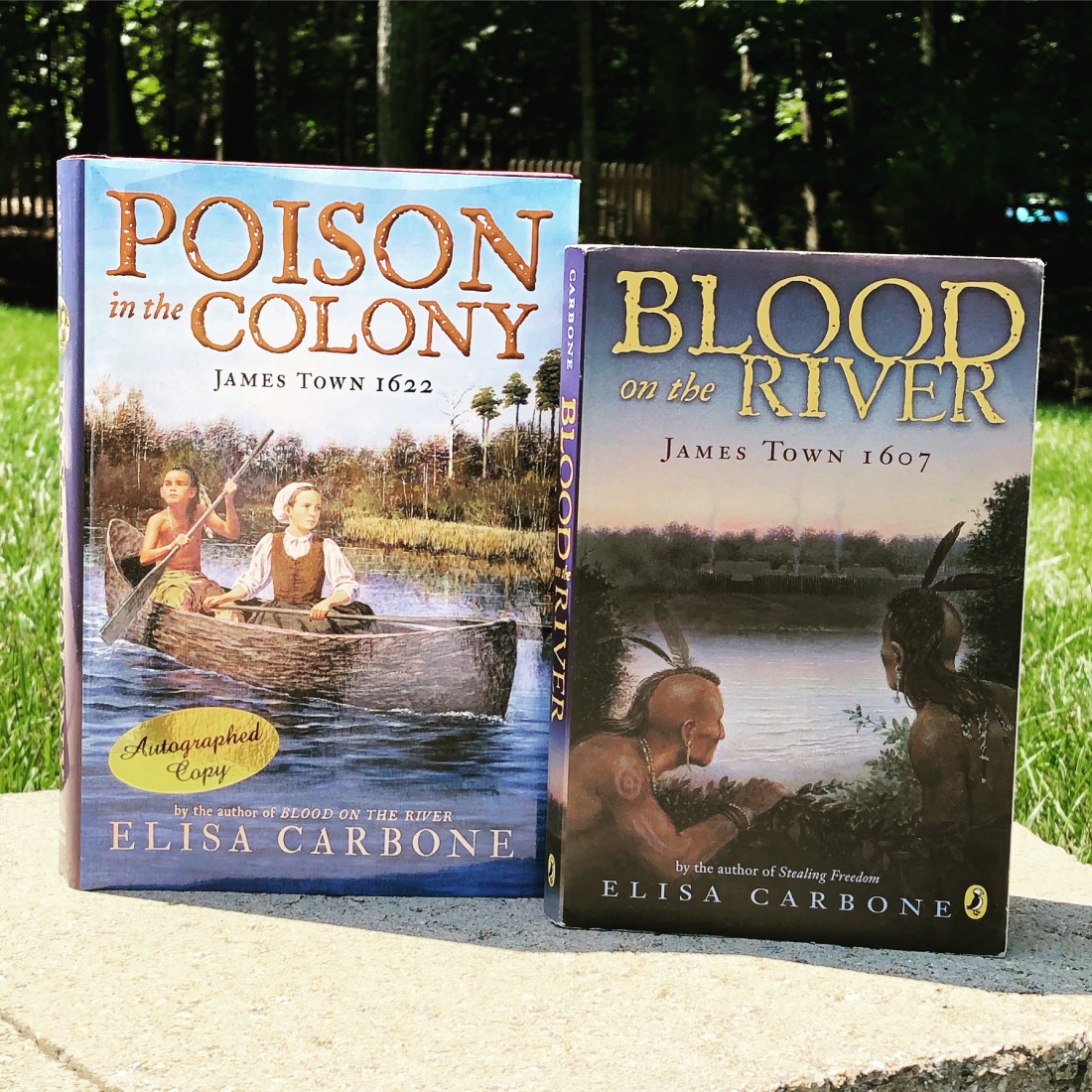 Blood on the River is a middle grade classic, serving as a well-written retelling of the events that occurred with the settlement of Jamestown in 1607.  It follows an 11 year old servant boy, Samuel, through the arduous sea crossing and finally onto Jamestown’s shore.  Fighting disease, hunger, and the native peoples, it’s a wonder that anyone survived in the colony!  Children and adults will like the non-stop action and fast-paced story that takes Samuel through the first years of the settlement.  The recent sequel, Poison in the Colony, continues the story through the eyes of the first-born child in Jamestown, Virginia Laydon, and the problems that come with the expanding settlement by the English and the arrival of the first enslaved Africans in 1619.  With Virginia’s “knowing” or intuition, her family and the settlements are protected but at an extreme cost to Virginia.  Children will enjoy seeing the burgeoning colony through her observant eyes.  Look for a Travel with Books video coming soon about this book series!

I didn’t finish any historical nonfiction books this month but I am just pages away from finishing a book that has sat on my unread shelves for 9 years!  Look for it to be discussed in next month’s recap.

I also read 1 additional book outside of the historical genre by one of my favorite memoir writers – Lift by Kelly Corrigan (library).  Written as a letter to her children, she has a way to speak the truth of parenting through laughter and tears.

If you enjoy following along on my Year of Historical Reading, be sure to friend The History Mom on Goodreads and to follow me on Instagram, where I post the books I am reading in real time.  You can also visit my shop on Bookshop.org, an Amazon alternative that supports independent bookstores.  This link is an affiliate link where I receive a small commission at no extra cost to you.

Look for a post coming soon about my favorite books of the year so far!